I think I mentioned in my last blog that my Mum was battling cancer.

I dont believe she should have been taken when she was. She was poorly on the Friday. I noticed her breathing seemed strained so I told my Dad who took her to the doctors. According to my Mum, she was fine. She always was…no matter what. Her response would always be “Im fine”. The doctors tested her oxygen levels and found them slightly low so sent them to the hospital.

The hospital let my Mum go home the following day, with oxygen. Lots of oxygen! I couldnt understand how or why they let her go when they have kept her longer for far less! It didnt and still doesnt make any sense!

We didnt realise how seriously low her oxygen was until the drive home. When my Dad was informed the portable oxygen will only last 38 minutes. It was a good job my sister had taken two tanks! My mum was not allowed to leave until the oxygen had arrived at their home for my sister to get to the hospital with the portable one. My sister didnt realise the seriousness either as she wondered how and why so much equipment was being delivered. We have had no experience, so thought it was normal.

We found out my mum was on level 12 oxygen. Again, we didnt realise how high that was. Not until we found the tanks at home only went to 15. Again…we didnt think it was that bad as my Mum was fine on the friday, just slightly breathless. On the friday in the hospital she wasnt on that much of a high dose of oxygen!

I am going to have to stop there. I will continue later on.

I find it very difficult to actually talk about this in real life. So I thought I could vent here.

My mother was diagnosed with breast cancer a few year ago. She is a tough cookie, and refuses to accept anything is wrong with her. No matter how poorly she may actually be. Because of this mind set, she ignored the lump/spot on her breast. She was very good at hiding it from my dad.

One night she was sick in bed and as my dad went to help her, he felt her arm was swollen. He took her to hospital and that was when they found it. The spot/lump had eaten away and made a huge hole in her chest/breast. The swollen arm was lymphoedema(sp?).

It was too late to be cured. Further testing had shown it had spread to her spine.

As the weeks went by, we were given news of different tumours. It was no longer about breaking the news gently to each other, we grew so used to hearing it!

In February this year, it become real again. We were starting to see the effects of the cancer. She flew through chemo without even a sniffle. In our heads, she was fine! So seeing the change in February forced us all to accept that the cancer was really happening.

On the Easter weekend. My mum had a seizure. We found out this was due to two brain tumours. Radiotherapy was an option and she took it. They took too long, I think. After a week of coming out of hospital, she went downhill. She could barely stay awake. She was losing more and more words as the days went by. By the second week, she seemed to be just a shell of herself. Her body was there, but she was not. I took time off work to help care for her. We grieved for her. I was losing hope. There was still 4 weeks before the radiotherapy appointment!!

The doctors increased the steroids while we waited for the appointment. It worked, she came back for a bit.

She had the radiotherapy. Completely unaware of any of this. By her 5th session (out of ten) we had seen no change, and were feeling like we were putting her through something so harsh, for nothing! The 6th session came and she could not swallow her medication again – I knew she was getting better! I told my dad and he smiled. We were so close to giving up! My mum can not for the life of her swallow tablets, it takes her absolutely ages! When she was really poorly and just a shell of herself, she was swallowing the tablets no problem what so ever. By the 10th session my mum was back to herself. Apart from no longer being able to walk.

This week, I have noticed she has been a lot more quiet than she was. She has been having more naps. Today she is in hospital. She is confused again, she cant see out of her left eye and her left arm is swollen and weak.

I fear this is the steroids losing their effect as the doctor said they will only work for so long. It is either that, another brain tumour, or one of the four have grown. There are no other treatment options.

This has been the hardest thing I have ever had to deal with, and the hardest thing to write! Many tears have fallen when typing. At least I am getting it out as, like my mum, I let everyone believe I am fine. I am really not.

My mum is really, really strong and such a fighter. I hope to god she can pull through this.

If you find any lumps, strange spots or anything unusual on your breasts, or anywhere! PLEASE, PLEASE get checked out. Don’t risk going through what we are going through. My mum’s breast cancer was easily treatable…had she have had it seen to. Now she has cancer in her breast, spine, bones, lung and brain.

I am slowly coming to the realisation that the frizz will always defeat me. No matter which products, or how many I use. It will always be there, mocking my attempts at controlling it.

I am trying to accept that the frizz is here to stay, but I keep having a glimmer of hope. So the battle continues!

I find there are times my hair looks somewhat frizz free. I feel like I have finally cracked it and won the battle. Then I see my hair in a different mirror and it’s like a different head of hair! Frizz, everywhere!

Do you find that your hair can look amazing in one mirror, yet another mirror displays a frizz bomb?

I am at the point of where I try and just go with it. Sometimes I try and bypass any mirrors so that I dont feel that frustration. I dont think I will be doing that again though…

I used a butter cream the other day. Hoping moisture would tame it a little. It did, I suppose… but it also made the top of my hair feel flat, and my locks looking extremely greasy. I didn’t realise how bad my hair looked until I had got home that night. Oh the shame.

I’m not sure what is more stubborn…me or my hair!

This was about one week into doing the curly girl. I had done nothing to it other than let it dry. Not even so much as a scrunch. Yes…it is a mess!

One to two weeks after the previous photo. The curls are forming. I have scrunched, diffused a little and then air dried.

I think it is safe to say that the Curly Girl Method does work. Hopefully my hair continues to improve as the weeks go by 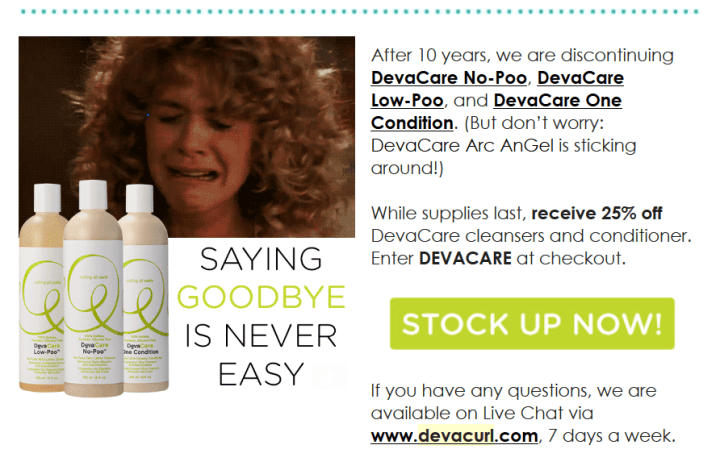 I got an email from DevaCurl a few days ago saying that they will be discontinuing their DevaCARE line. This is their orange-scented color care line, not the original line, don’t worry! DevaCare No-Poo, Low-Poo, and One Condition will be discontinued, but Arc AnGel will continue to be produced. It looks like they’re dropping DevaCare […]

When I decided to unleash my curls, I turned to google for advice. I stumbled upon the ‘Curly Girl Method’. I kept reading  no sulfates, no sulfates and thinking what are sulfates! I am still not sure on what they are, I just know to avoid them at all costs. Apparently sulphates, silicones, any other cones and parabens (i think) are no good for your hair. Especially curly hair.

I went in search of a shampoo and conditioner that lived up to these standards. Deva Curl seemed to be my safest option. A pricey option, but safe.

I thought they were fantastic. I still do! The only complaint I have about them is that they turned me into a product junkie!

I also learned that shampoo is not so good either. Co-washing (conditioner washing) is a must. So rather than using shampoo and conditioner on wash days, you just use a conditioner. Preferably a Co-wash. ‘As I Am Coconut Cowash’ is just delicious!

There is so much to learn. It is an exciting journey (for me anyway 🙂 )

Welcome To My Journey!

My name is Claire and I have decided to create my own blog about going back to my natural curls. I have kept them hidden for about 15 years and I think it is about time they were unleashed again!

It is not an easy journey, at least it hasn’t been for me. I have found this change has created havoc for my already low confidence and self esteem. However, I am determined to push myself through this so I can be…me!

I am tired of hiding a part of myself, and feeling ashamed to be caught with my hair not straightened to perfection!

I am looking forward to sharing my journey with you!